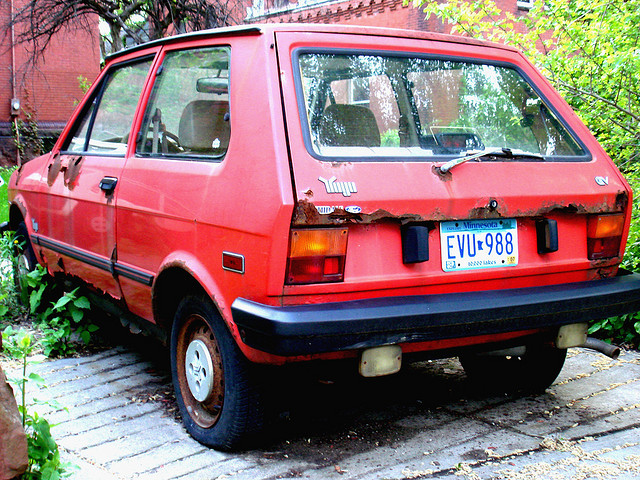 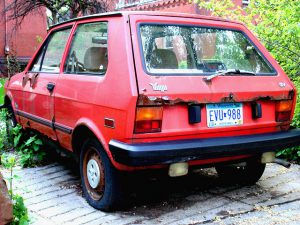 So I was out walking the dog the other day and saw a teenager drive by in a BMW, their high school parking lot tags hanging from their rearview mirror.  My first thought was not “Wow, lucky kid”.  My first thought was “Wow, that kid is missing out on a majorly important life experience – the piece of sh*t first car”.

This made me start thinking about my first ride, a 1981 Pontiac LeMans (driven in 1993, which makes it an instant POS classic).  We bought it from the neighbors across the street, who assured my parents it was safe, reliable, and had no issues.  False.  And I’m pretty sure that directly breaks one of the ten commandments – “Thou shall not bear false witness against thy neighbors, especially about cars they will see driving down the street, a trail of smoke billowing behind them”.  It was a big pale aqua boat of a car “to protect me if I got in a wreck”.  The fact that my sister four years later got an adorable little Omni hatchback made me wonder if they were lying to me or loved her less.  But I loved my car.  It had wheels and an engine and that was better than my ten- speed, and I thought the car/boat/tank was wonderful.  Even though the transmission didn’t work. Even though it was an automatic that I then had to learn to drive like a stick shift car. At the time I was afraid I was going to die, but in the end, it made me a much better driver, and I believe, better human.  So here’s a summary of my belief system that POS cars make for a character-building experience that is developmentally essential for kids today.

1.  POS cars make you think quickly on your feet

My POS car would idle just fine while I was waiting at the stop sign for traffic to clear and cross, but as soon as I put my foot on the gas it would stall out. This would then require me to flip the gearshift into neutral (and it was the kind on the steering column, remember those?) turn the ignition to restart the engine, then flip it back into drive and gun it across the intersection.  I learned to make sure there was PLENTY of time to cross the intersection because I needed an extra four seconds (maybe ten, depending on whether the engine turned over on the first try) to make this little miracle occur each time.  But I could think on my feet and make a million decisions all at once – my driving skills and reflexes were like lightning…

If you’re not sure if you car is going to make it through an intersection, you don’t push it (figuratively anyway, I have actually pushed a car physically).  My brother also had a car known to stall out, but only in the rain and on random occasions you couldn’t count on. He had an old Camry, and because he knew that at any moment his car might stop working, he would refrain from cutting people off or making risky merges.  If you have a race car, you drive like an idiot race car driver. Because when you’re a teenager your eyes don’t work well enough to see that fine print in the tv commercials “closed course. professional driver. do not attempt”.

If your POS car can’t make it up big hills then you won’t wander too far from home. Unless you live on a hill in which case you really should just skate board anyway.  My friend Mike drove an old station wagon that couldn’t make it up the hill to surrounding towns. This was good for several reasons, one of which is that the girls up the hill in said towns would have gotten him in trouble.

4.  POS cars keep you from speeding

If your car begins to act like the starship enterprise and you’re worried it might fall apart if you put it through too much, you’re gonna be nicer to it.  My partner in crime Jess had a Dodge Colt that shook over 60 mph. It was a nice reminder of the speed limit, which back then was just 55 mph. You know, because it makes sense to increase the speed limit the more cars we put on the road. Make ‘em all go faster so we can speed around the accidents.

5.  POS cars make you a better navigator and keep your mind sharp.

Forget an actual navigational system. Or using your phone for google maps. Try looking outside and remember how to get where you are going.  Then try and do it with a challenge like my friend Anne, who had an old Honda that at one point only made right turns.  That would keep me focused on driving for sure instead of being distracted by a million different things.

6.  POS cars make you appreciate comfort (in other places).

My friend Dee had a 1976 baby blue VW Dasher she called The Deathmobile (and really, what first POS car wasn’t?)  She used to take the Yellow Pages (back when we had such a need for those things) and sit on top of it while driving because the springs were shot.  My kids complain because they don’t have heated seats.  Dee’s Dasher also had a driver’s side window that wouldn’t roll up all the way which just added to the rock and roll experience in cold or rainy weather.  Remote start anyone?

7.  POS make you think about where you park your car.

My bestie Loren had an old Ford Maverick, complete with am radio, and of course no air conditioning (that was an OPTION back then my friends!) It also would keep on running even when the key was pulled out.  This made it very important to remember where you put the car because chances are it might not be there later.

The keep on running thing was apparently a theme of the 70s.  Anne (right turn Honda) also had a 1970’s Cadillac (of course given to her by her Grandfather, they don’t actually allow anyone under 60 to buy one of those.) It was huge, dark brown and didn’t need a key to start it. Everyone at school knew this and borrowed the car. Sort of an American car version of socialism. Or the first Citibikes.

9.  POS cars keep you on your toes and prepared for anything

Friend and neighbor Ed’s first car had an 8 ball shifter that would come off and roll around on the floor at the most inopportune times. If there’s a chance that at any given moment something might lodge itself between your brake pedal and the floor of the car, you’re gonna pay attention.

10.  POS cars make you appreciate the value of material things, like cars.

And of course, let’s face it, the reason car insurance for teenagers is so darn high is because they wreck stuff all the time.  They wreck cars, they wreck other things with their cars, and hopefully if all goes well they don’t wreck any humans and no one gets hurt. When my friend Tracey took out her nearly decade old 1980 Mercury Cougar six hours after getting her license, picking up friends, in the rain, and crashed it at a bad intersection.  Yes, it sucked, but the thing that was new was her driving experience, not the car.  Maybe that makes it hurt just a little bit less and keeps us focused on what’s actually important.  Let the car be the POS. Let the kids be the thing of value. It’ll be better for everyone in the end. Enjoy the ride.