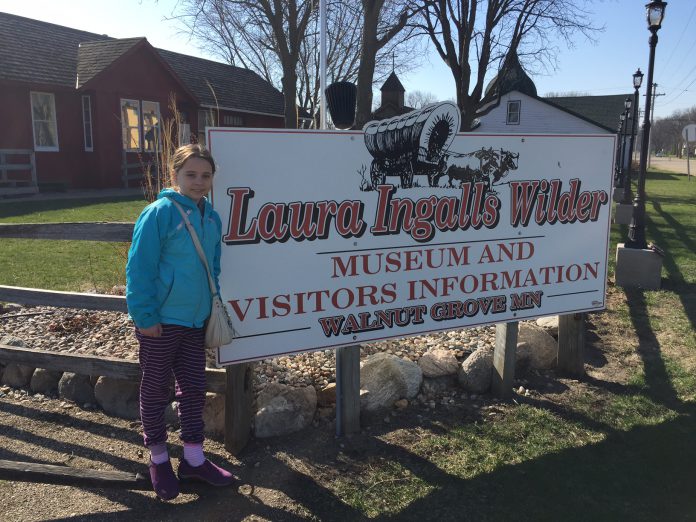 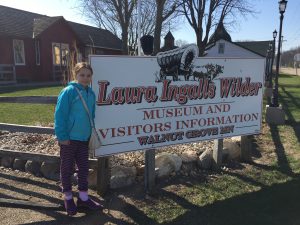 We left the boys home. They weren’t interested. Or at least not obsessed enough. So this trip was just Katie and me. Two girls on an adventure to Minnesota, to follow the road to all things Laura Ingalls Wilder and Little House on the Prairie.

We started by flying from NJ to Minneapolis/St. Paul. I’m not sure why these Twin Cities are so close together considering how far apart everything else in the state is, but they’re only 25 minutes apart. It can take longer than that to get across midtown in NYC. We hopped in a rental car for a 2 ½ hour trip across the southwest portion of the state. The rental car guy asked if we needed a map (yes please) and where we were headed. “Walnut Grove!” I exclaimed, thinking everyone on the planet would jump up and down at how exciting that is. I mean Laura LIVED there. He shook his head, “Never heard of it,” he replied. “Sleepy Eye? Springfield?” I implored. Those were the big cities Pa would take the wagon to when he needed supplies. “You must be going out really far,” he answered, and gave me directions out of the airport. I was on my own, with Google maps and Katie, age 10, as navigator. I also decided the rental car guy was nice, but a total turd for not knowing and worshipping Walnut Grove.

Being a Jersey girl, I’m used to urban sprawl. That’s not the case in Minneapolis. The city ends and so do the buildings. Then it’s farms. Lots of farms. Like, so many farms it made me realize that I don’t think about where my food comes from often enough. Figuring out where the fries are from at Five Guys isn’t really the same. Since it was only April the fields were just getting tilled and seeded so I didn’t know what they planted here. After passing a real life ethanol cooperative, I figured corn would be top of the list. I had to look up the other crops of the state – soybeans, hay, sugar beets, wheat, barley, flaxseed, oats, peas and potatoes. Noted.

The farms were huge. The roads were straight. There was lots of dirt and very few trees and not a hill in sight. Katie’s instructions from Google maps went something like this: “Mom, you’re gonna go straight for twenty miles, and then you’re gonna go straight”. Got it. Sometimes she’d say “Coming up on your right is going to be County Ditch number 40A (and number 77… and…. )”. Got it. Not enough on the maps for roads, towns, but plenty of room for named ditches. Once we passed a “judicial” ditch number 6 and we talked about what the difference might be between county and judicial ditches. We passed one “city” named Cobden with a population of 36. That’s the exciting landscape of the drive.

As the first signs appeared for the highways to Mankato I started to get excited. Mankato is where Pa used to go for the big supply trips. Once he took Ma for a special getaway (that didn’t go so well because she was so worried about the girls and everywhere they went they were reminded of what happens to children with bad parents) and Mr. Edwards watched the kids. He nailed Carrie’s dress to the roof while he did repairs. That was also the episode that included rattlesnake stew. Thankfully I forgot about that little fact when I was walking around otherwise I would have been on constant guard for rattlesnakes. Like quicksand, I always thought rattlesnakes would be a bigger problem in life than it’s actually turned out to be.

We spent a morning at The Laura Ingalls Wilder Museum. It’s actually a series of buildings with different artifacts in each one. There are signs of quotes and passages from the books, along with the real items nestled in next to it. Some are the “real” things from Laura’s life, like a quilt, others are similar period appropriate pieces like china. Would I have loved it if everything Laura ever touched were there in the museum? Yes, but considering she didn’t publish Little House in the Big Woods until she was 65 (there’s hope for me yet to be a “real” writer) I’m not surprised that most of her childhood is gone. 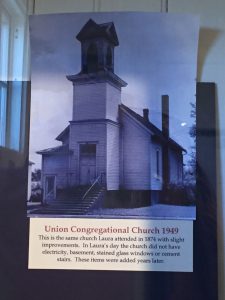 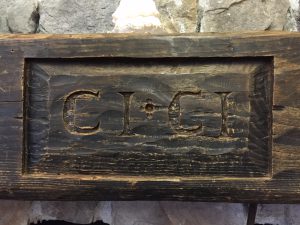 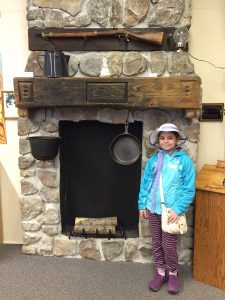 here’s still plenty in the museum to ooh and ahh over. Photos of the church / one room schoolhouse as it existed until the 1940s (it’s exactly the same as the TV show). If you want to see the bell that Charles helped fund you’ll find it in a different church (and no mention of Tinker Jones and the kids contributing their metal toys to the melting pot while the grownups argued). The room with all the relics from the tv show had me bouncing when I came across the REAL mantle from the fireplace. Remember when Charles carved his and Carolyn’s initials in it? Yes, I traced the CI + CI. I wished Charles (or Michael Landon) were my dad on more than one occasion. 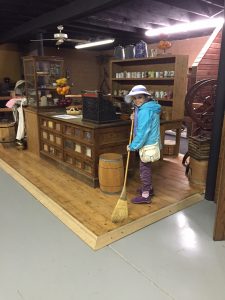 Katie thought the play spaces were really fun. There’s a store space where you can ring up produce and grocery items like Mr. Olsen. A post office space where you can sort letters addressed to the townspeople of Walnut Grove like Postmistress Grace Snider (nothing smelled like Lemon Verbena there but they did have that soap in the shop). And a wagon you can climb aboard (4 feet by 11 feet) that is a recreation of what the Ingalls family used to make their journey. I had a hard enough time driving 2 ½ hours in my rental car. 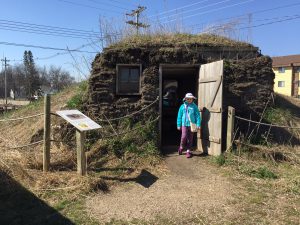 There’s also a sod house recreation that is the same size the family used when they first arrived (the prairie had lots of dirt you could make into bricks but very little timber for building). Again, the size of everything floored me. The dugout was no bigger than 10×14. For five people. And all their stuff and supplies. I’ve seen tents bigger. I like to think I’m an appreciative person, but if Brian made me a tiny house out of dirt and said “Here you go honey!” I’d probably get in the wagon and head elsewhere. And I’d take Jack the dog with me.

The whole museum takes only an hour or so to explore, and then we headed to the shop. Lots of bonnets, aprons, prairie dresses. Exactly what you’d expect. We bought some bonnets for our cousins back home and asked the clerk about lunch. There are exactly two places to eat in Walnut Grove, population of 871. I wonder how many lived there during Laura’s day.  There’s the Walnut Grove Bar and Grill (which is also a liquor store) and Nellie’s. How do we not eat at Nellie’s?

But first, a quick trip over to Plum Creek. It’s a beautiful spring day and Katie and I held hands and walked the path through the sparse woods surrounding this section of the Creek. There’s now a swimming hole called Lake Laura not far away. I thought about Laura and Mary and their friends wading through the creek and catching fish and the story of Town Party Country Party. The creek was such a huge part of all that fun. If I came across the same creek anywhere else I’d be less impressed. But this is a famous creek. I love it.

Back to Nellie’s. We walked into what looked like a ranch style house and found the locals at the counter. They all turn to look at us and give a nod. That’s the extent of the locals hello. We must seem out of place as April is not high tourism month. “Pageant” is in July, when people dress up in full regalia of the prairie and reenact parts of the books. That’s when visitors come. This morning Katie and I were the only ones in the museum. Katie and I take a booth and check out the menu options for my gluten free girl. “Laura’s chicken” has cheese, perfect. Hold the mushrooms. Hold the bun. Gluten free in the middle of the prairie is just hold the gluten. We’re not going to find gluten free pasta around here. I wonder if anyone in a population of under 900 has ever been diagnosed with Celiacs. I don’t think Doc Baker really thought about that when he did his diagnoses. Then again if he did I think the cure would just be castor oil. Again, one of those things I thought would be much more of an issue in life.

While we’re eating I overhear a gem of a conversation. One of the women who’s come in for lunch is talking to the owner about a part she needs for her truck. The local mechanic says she needs to get the part from Makato. MANKATO. That’s far away. Over 80 miles and more than 90 minutes. By car. Longer by wagon. Wagons traveled between 10 and 20 miles per day, not much different from walking. Well, healthy athletic people walking. I am challenged by the 10,000 steps game. So one of the other locals at the counter says “Mmph”. To which the owner, let’s call her Nellie, says “Fred, you ever go out to Mankato?” And Fred says “Not if I can help it. Try to make that trip no more than once a year”. And the woman who needs the car part says “Mmph”. And that’s how it goes in Walnut Grove. 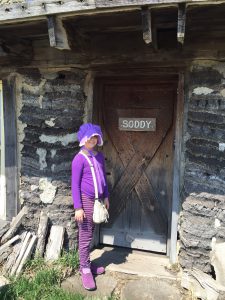 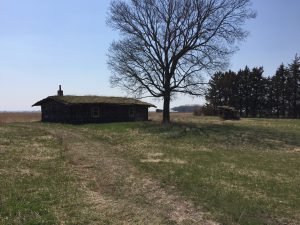 Katie and I drive back towards Springfield (because there are only camping sites, no hotels, in Walnut Grove, so no thank you) and stop at the recreated dugouts at a local farm. It’s literally a farm where a woman sits on her porch and takes our $4 admission while she pets her dog. Katie and I admire the sod architecture, the replanted prairie grasses (Minnesota used to be all prairie, now it’s all farm and less than 1% prairie. I don’t know if that is good or bad. I generally don’t like open space. I like farms and prairies though. It’s the woods that freak me out. Most likely to be the site of a serial killing crime). Then we head back towards Springfield and I bring Katie to dinner at the local restaurant steakhouse. This reminds me of the episode when Manly and Charles had a bet on who could find the fastest route to Sleepy Eye and they made a deal that whoever got there first would buy the other dinner. I tell this story to Katie, who hasn’t seen the last few seasons of the show. “Who won?” she asks. I forget, I say. “Great story Mom”. We order our steak dinner and find salad bar is included. Since Katie has just decided she might try lettuce we head up to check it out. Lettuce, peas, peas in cream, peas and ham, ham, pasta salad, pickles, and chicken salad. Hello Minnesota Salad. We wait for steak. “I think Pa pretended to win, except the waiter ratted him out to Almonzo, and then he ordered a huge dinner and Pa ordered soup,” I say in a rush. Katie looks at me and smiles. “Better story, Mom”. I smile back. Better story. 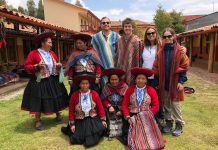