I told my daughter I needed to write about gun violence. Know what she told me? “Mom, be sure you’re not too polarizing. People won’t listen.” She’s right. At age eleven she’s figured out that we adults need to be reminded how to speak to one another in order to fix a problem. But I have hope and belief that we can fix that discourse in our country. We just need to make speaking to each other with kindness and understanding part of the way we fix the other issues. Common sense gun control? Yes. Not lashing out and calling someone an idiot for a difference of opinion on social media? Let’s get there. Together.

My daughter will turn 12 next month. Her best friend at school greeted her the morning after the Parkland, Florida shootings to tell her that her camp friend lost her best friend in the attacks. A friend of mine from college posted on Facebook that her children, in the middle school next door, were safe. Her son had called her from underneath his desk, sheltering in place, to let her know he was ok. I haven’t been able to put my phone out of sight since then. What if my kids were attacked in school and they called me to talk to me in their fear and I had put my phone down to go do laundry or go to the bathroom? My own anxiety is changing the way I act during my regular day.

The six degrees of separation to gun violence are circling and getting tighter and scarier and sadder.

And, yes. There is a gun problem in our country.

My kids practice lock-down drills, shelter in place drills, active shooter drills, and have been taught how to jump out a second story window to escape an attacker. SOMETHING IS BROKEN.

Do I like guns? Nope. But I’m willing to listen to those who do. My sister’s husband is a hunter. He has a gun closet, locked all the time, and he hunts geese, ducks, deer, and other things to eat. My sister makes these amazing duck popper things that are wrapped in bacon. They are yummy. I’ve told him many times that if there was a zombie apocalypse they should plan to come to my house, because we have a generator and he has the weapons. He’s reminded me we wouldn’t last long without the weapons. I’ve also thought I wouldn’t last long without duck poppers. I believe him. I respect him. I just still don’t like guns.

My father was drafted and served in Vietnam and taught me from an early age that guns kill people. He was never the same after his tour. My stepfather enlisted in the Army and was promoted to Major in a Ranger unit. He retired with full pension and a belief that I should keep my shoes lined up in the closet instead of coming in the door and kicking them off my feet and seeing if I could get them to land anywhere near the closet. He taught me a respect for guns. And told me that guns kill people. I believe him, about the guns needing to be respected and that they kill people. I don’t believe in the necessity of a neat closet floor. Don’t get me wrong, if you come clean up and organize my closet floor I will be appreciative. But it’s not my thing.

If it were up to me I’d say everyone can have as many 18th century muskets as they want. That’s what our founding fathers envisioned when they came up with this whole second amendment thing. But I get it. Progress. Better guns. Sure.

But an AR15? That’s gonna make that duck full of bullets and you’d have to pick that out of your teeth along with the bacon when you eat the poppers. That is not a weapon to hunt animals so you can eat food. It’s a weapon to kill humans. We do not have saber tooth tigers, wooly mammoths, or freaking dragons, so please don’t tell me an AR15 is a hunting rifle. I don’t think civilians should have them. And for the record I don’t think anything in that category of lightweight magazine-fed, gas-operated semi-automatic rifles are hunting weapons either. I don’t know every name of every gun. There are a lot of names. And they have a lot of bullets. Too many.

But here’s the thing. I’m gonna listen to you tell me why you want a big named gun with a big amount of bullets and how it’s the best thing for the zombie apocalypse and how you promise you’re gonna be really safe and keep it locked up and the kids won’t be able to get into the safe because you aren’t using the same code as the garage door and it’s a fingerprint lock and an eyeball scan and you need to provide your own saliva to get into the safe. Fine.

But if you really want something that powerful? You have to go to CLASS for safety lessons and get a mental health exam and parallel park my SUV while holding a cup of coffee to show me how steady you can be under pressure. And I promise whether you say you want to defend your home against intruders or you say zombie apocalypse during your mental health exam I am gonna nod along with you and stamp APPROVE on your application – because I GET IT. And if you are convicted of domestic violence or child abuse YOU LOSE YOUR privilege. No more guns for you. This is not a slippery slope. This is nonsense. You should not be allowed to walk into a store and just buy this and put it in a backpack and walk onto the street. I can’t even buy pseudoephedrine without producing my license and having a limit to how many pills I can have in a month because somehow the government got involved when they were worried that instead of treating a sinus infection I was going make meth instead.

And do you not like my line in the sand? Did me saying “too many bullets” just make you cringe and you don’t understand why that is where I am carving out a section that should be regulated? Then kindly come up with your own idea. I’ve already said I don’t like guns at all and maybe going back to rocks and sticks and bobby sticks British style is the way to go. But I am listening, open, ready for a suggestion and a compromise. That’s what we need to do. Let’s try a line in the sand ANYWHERE other than where it is right now and see how it goes. We have work to do.

I was trying to figure out why we haven’t come up with a solution yet. Is it the powerful lobbying of the NRA? Is it an inability of politicians to compromise and “give in” because they think of governing as winning and losing? Is it just too valuable an issue for them to run on for re-election? Then I wondered if I was overthinking it. Maybe we just need a better hash tag. The women behind #MeToo were victims and brave and they told their stories as a collaborative effort with a hash tag that made us pay attention. And it seems to have gotten an awful lot accomplished over the last year. Whether it makes you exhale a sigh of relief and say “Finally!” or start to sweat wondering if you personally have ever done anything that is going to come back and make your own life difficult in your personal or professional life, you’ve got to acknowledge that a hash tag started an awful lot of action. Maybe we just need a solid hash tag to fix the gun problem in our country.   Apparently there are already quite a few.

So allow me to add my own favorite today:

Sit down. Work together. Find a solution. Progress, not politics. We’re all in this together. And our kids are watching. And waiting.

Last year at the women’s march, I met a woman named Jamie on our bus to DC. She lost her brother to gun violence over 20 years ago. She and her mom have been active in the movement for change in our country since then, trying to turn their grief into progress. I’ve linked to a page here about the groups she works with for anyone who wants to be more involved. I reached out to Jamie when I decided I needed to write this. Do you know what my first question was? “How do you keep going?”

Know what she said?

“I have learned self care. I have had to step away from the debate at times. It’s just too overwhelming. But then I get reenergized again.”

So here’s the thing. Yes, there are overwhelming statistics. Yes, it truly looks like it can’t be solved. Yes, there are graphics about the cycle of violence, a flurry of media coverage, and then a forgetfulness when the news cycle shifts. And then a story of violence again. But there are people who have been trying to stop the pain of loss for decades. And it’s time to listen to them, and help them. Are you going to quit your job and dedicate yourself to activism? Awesome. Do you still need to pay your bills and mortgage and continue with “regular life”? I get that too. Do a little something. Read about Jamie’s story here. Send some money to an organization that you like and think can make progress for all of us. Talk nicely to someone with a different viewpoint than yours. Send a note of thanks to someone who is doing work you admire.

I don’t want my six degrees of separation to get any closer. It hurts when it’s at arms length. I want this fixed. Please. I’m not anti-America because I don’t like guns. Do I wonder if my family might be safer living in a country with less gun violence? Yup. But I really don’t want to have to learn another language at this point in my life. And at the end of the day, I’m as red white and blue as can be. I believe dissent and progressivism is American. And this too will be something we can make better for our kids.

They’re counting on it. 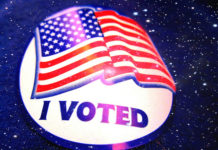