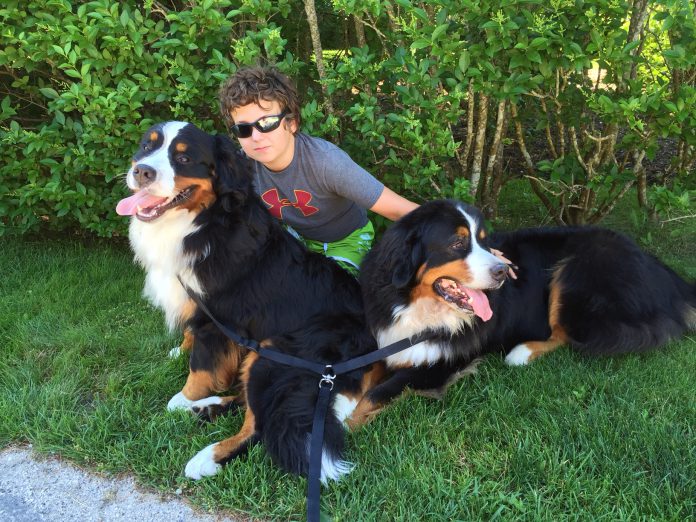 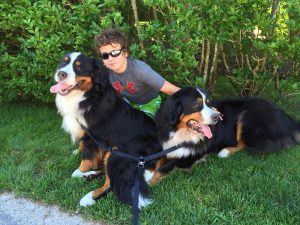 I have had a near death experience. Not really, don’t panic.

The dogs and I went on an early evening after dinner walk. The kids of course didn’t want to come, and I wasn’t in the mood to argue, so off we went, two dogs and me.  It was still hot (you know, 75 degrees), so the doggies weren’t going to go far. As we were walking I was noticing that Nicky’s butt/back fur looked weird, considering he’d been groomed yesterday. So I started tugging at it. He liked that, a lot, me tugging on his butt/back fur. And out come these giant tufts of fur. I sort of looked at them at first, wondering if I should put it in my pocket, or a poop bag, and then I decided I would be helping the bird population and their future building projects if I just left them on the ground. So I dropped them behind us like a furry version of breadcrumbs and they rolled along the street in the sea breeze like tumbleweeds.  As I looked back over my shoulder it looked a little creepy, like ghost kittens. Or rats. Or ghost rats.

Almost home. Literally across the street.  Gryffin poops. Liquid fire farting squirting OMG that must hurt your anus poops. It’s everywhere. All over the grass, dirt, and oh dear lord in heaven no, his butt fur. His long, flowing, just-been-groomed tan butt fur is covered in browner poo.  My first thought is what did I feed him? My second thought is do I really have to clean that up? No one has been to this house in two years. I know this, because I have been stalking it since I want to buy it and start my family compound. But until it’s mine, I clean up these gooey multiple piles of hell.  Gryffin then sits. “Yes”, I say, “Sit on that, rub it around in the dirt, you need to get that shit off of you.”  He looks at me and pants. And his butt remains stationary.  I need a plan.

I of course have my cell phone. In case the kids need me while I have been gone 11 minutes and 11 houses down the street.  I call Alex. He is 12. He will help me. “Helloooooo?” he croons into the phone. Thank god he answered. “Meet me at the door with like sixteenish wet paper towels Gryffin pooped all over his own butt fur”.  “OKayyyyyyyyy…..” And he hangs up. I don’t know what is weirder. The way I talked to him or the fact that he is just responding without question. He is 12. His response rate is sub par for humankind. Probably above average in his age group. And apparently off the charts in a crisis.

The next few minutes are a dance of Alex trying to convince Gryffin to stand while he is exhausted from his 100 yard outing, giving him treats, while not giving Nicky treats, and then Alex deciding that Nicky deserves treats for NOT shitting on his own butt fur. I think this makes sense. The paper towels do little except make the poop glisten and shine like he’s just gotten highlights. I drop them and dear heaven help me, Nicky picks up a pile of poop paper towel in his mouth and runs away. “Noooooo!” Alex and I shout in unison. The most disgusting puppy in the universe. He has a life-long habit of eating his own poop and the poop of others. “Give him a treat!” I shout.  “Why are we rewarding him?” Alex shouts back. “Bribing! Bribing!” I am reduced to single word sentences.  The treat is offered, the poop is dropped, the swap is made.  Alex ushers Nicky into the house and out of the way.

Paper towels now make me ill. “We need scissors,” I say. Alex brings them. “These scissors are terrible! It’s just ripping out his fur!” Alex finds new scissors. He is my hero. He is keeping my sanity.  The new scissors are efficient and through. “Almost done,” I mutter. And then just as I’ve opened my mouth, and made my final cut, a beautiful breeze picks up off the water and off of the very efficient scissors, and three gallons of butt fur go flying, and into my face. “BUTT FUR TO THE FACE BUTT FUR TO THE FACE!!!!” I scream and do the appropriate dance of a near-death experience.  Alex takes up the role of Greek chorus and begins to chant and dance as well.  He could not be any more grossed out that his mother is now contaminated.

And then Alex says, “Am I done now? Because I’d like to go back to my room and pretend this NEVER HAPPENED”.

Yes. We are done. And I need to pretend the same. My partner in crime. And denial.  I need to go take a shower. And wash my face. A few thousand times. 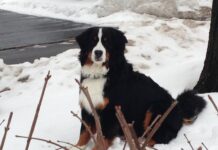