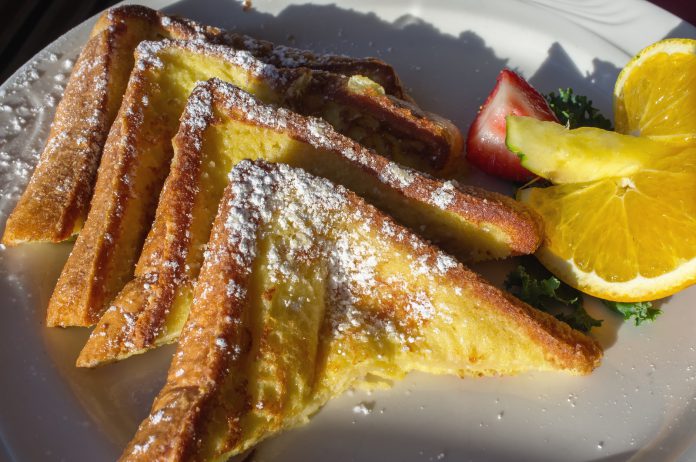 My brother-in-law has this expression he uses, when we are all with the kids and really want to use curse words but don’t want to ruin our children at too early an age (there’s plenty of time for that), but he really has something that has surprised him, or infuriated him, or just needs an excellent expletive. “What the FRENCH?” Somehow, over the course of history, it then became “What the French TOAST?” It is sort of catchy once you start using it.

If I were really good with this whole website thing I’d pop in an audio-file with a fancy hyperlink so you could hear how to properly say it. “what the FFFFFFFRENCH?” Long F, emphasis on the French. If you use “what the FFFFFFRENCH – TOAST? There needs to be a slight pause after FRENCH, and then emphasize the TOAST. Sort of going low on TOA and up on ST. Trust me, it’s funny.

Now, even though I know in my heart that “What the FRENCH?” is not an actual curse word, it still seems somehow on that road to “you know something bad starts with F and I’m not using it but I’m alluding to it and at some point, child of mine, you are going to want to know what French stands for”. For a long time my kids thought the “F” word was “fart”, so they said “toot” instead. Kids that came over to our house for play dates and said fart had no idea why my kids were tattling on them. Then the tattling stopped and I realized they thought they were getting away with cursing even though they didn’t know the “real” words. This concerned Brian more than me, but I was also arching my eyebrow realizing that at some point these “little” kids of mine was going to be those cursing drawing dirty picture kids at sleepovers. Brian and I agreed that transitioning the kids to have an understanding of curse words was something we needed to work on, but we had different approaches. I started swearing in French. At first I’d mutter “Merde”. For the anti-francophiles, merde means manure. In a not nice way. Then I even started feeling badly about that and I’d say “Mercredi”, which means Wednesday, but has a nice curse-like ring to it anyway. The kids caught on to this and then I started hearing them cursing in Italian. Where could they have gotten that idea, I asked my half-Italian husband, who admitted to telling them the Italian words, but not the English equivalents. My kids can curse better than an Italian sailor, but have no idea what they are saying. Good thing we haven’t traveled to Italy, yet.

Now, there is a real possibility that both our kids can swear better than George Carlin and are just really good at hiding it from us. While we walk around muttering Mercredi, Fanable, and Guacamole, our kids could very well be laughing at us behind our backs, passing notes to each other that say “Can you believe those F***ing idiots? They don’t know Sh**”. But somehow, Brian and I believed that our nine- year-old third-grader truly didn’t know any (or enough) English curse words. The impending move up to a new school for fourth grade made us feel, that as parents, it was time to teach him what the “real” curse words actually were, before some punk on the playground did it for us. Which may very well have already happened, but we were pretending it hadn’t.

Now this is where our approaches came to an impasse. For the record, I admit to caving on this one, because I didn’t know how else to do this. I learned all of my curse words along with my regular words because my (now-discovered mentally-unstable but that’s another story) father used them interchangeably while noting the weather. I knew the real ones early on, but thankfully my supermom made sure I understood those were words that just my dad said when he was mad (or happy or drunk or bored) and they weren’t to be used by children (especially dear lord not at school). So I didn’t have a real frame of reference on introducing these kinds of words to kids. So Brian’s idea was to explain to Alex that it was time to learn some curse words, as long as he promised not to use them (especially dear lord not at school). And “if he was good”, Brian would teach him a new curse word every night before bed. Now, somehow at the time this seemed like a great idea. Alex’s behavior in the evening actually improved, as he tried to demonstrate how good he was and he should be allowed to hear a new curse word every night. And just for the record – no – we did not introduce all of George Carlin’s seven dirty words – just the first three – the last four we are saving for teenage years. God help me if we can’t make it that long without needing to use the c word. I want my kids to think the c word is crap for as long as possible. And god help me if either of my kids ever become famous for using it along with “punt” like that lovely sorority sister did in her missive which could clearly be a tutorial in the learn your curse words lesson plan. (And once again, if I were tech-savvy I might link that here, or maybe not, but if you are inclined to read it just go ahead and google “sorority sister rant”. You’ll find it. Charming lovely lady).

But alas, after this little cursing curriculum began, Brian began to wonder if maybe it wasn’t a great idea to teach these words to Alex right before he went to bed at night. What started as father / son bonding became another parenting anxiety. We started picturing Alex in the dark of his room, snuggled in his bunk bed with his cozy blankets repeating the words over and over again like a mantra before he fell asleep. And it was still in his head when he woke up in the morning the next day, because over breakfast he would want to share some of this bonding information with me, but he knew that he was old enough to know this fabulous tidbit of language, but his sister was not. So he’d spell it, between bites of oatmeal, along with the Webster dictionary definition that Brian had provided. And then my Katie, who is seven, and in first grade, and doing really well with her reading, would try to sound out what the words were in between her bites of gluten-free muffins. And all of this would happen before I had my coffee. I’m not a morning person, and I’m not especially nice in the morning, so trying to yell at my kids for using not nice words, even spelled, when my eyes are still half-shut was leading me dangerously close to cursing myself. I mean, Brian, “What the FFFFFRENCH” are we doing?

At the end of the day, I think curse words are useful for many reasons. I have a grownup appreciation for a well-crafted sentence and a well-placed expletive. But I don’t believe that is why kids like curse words. They like curse words because they get to know something that they aren’t supposed to know. They have a secret language they can use with each other. It’s a foreign world and one they can dive into and feel special. So Brian might think that teaching curse words in the dark of night is the way to go. I don’t know about that. But since English, Italian and French curse words were still not hitting the mark, I decided to take steps on my own. And that is why I signed my kids up for Mandarin. No joke. My kids can count to 99 in Mandarin, tell you that you are their very good friend, and explain to you the five tones of vowels and which way the sounds go – up or down – for each word. This week their homework includes a Mandarin tongue twister – four ten four or something or other. Sort of the equivalent of “she sells sea shells by the sea shore”. And they think it is hilarious that I don’t have a clue what they are talking about, because they have their own secret language. China might take over the world, maybe. But I didn’t sign them up so they could be successful in business. I don’t really care if they become fluent or secret spy agents or whatever. I’m just glad they have something to say besides cursing. Until, of course, they learn the Mandarin curse words. Then we’ll be in a whole new world.