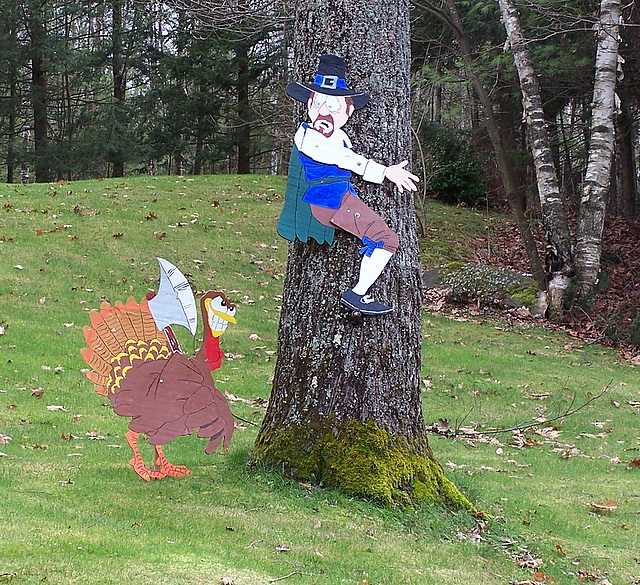 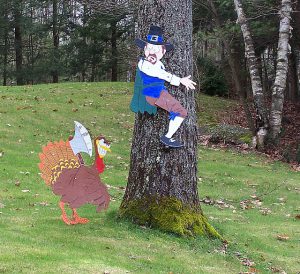 I will admit it. Thanksgiving is stressing me out a little this year.  Don’t get me wrong – I love Thanksgiving – it’s actually my favorite holiday.  If Thanksgiving were the only thing I had to do I’d be fine. But there’s all this other stuff in my life that also requires attention so hosting 30 people for a feast is making me a little wonky.  Of course, I just finished “hosting” 430 people for a local fundraiser, so you’d think I’d keep it in perspective. But sometimes I have trouble with that. So in order to remind myself that my Thanksgiving feast stress is nothing, I’ve decided I’d focus on pilgrim stress instead.

The pilgrims put together a feast for dinner as the highlight of not starving to death. That was a lot of stress, to not die. On the Maslow hierarchy of needs that’s pretty basic.  They were not coordinating sports carpools, they were not keeping track of the school calendar, their children were not begging for more tech time while you tried to mash the potatoes.  The kids were not bored or annoyed by more work because they were happy they had not starved. So let’s compare my modern day issues with pilgrim issues.

2014: The turkey is dry/overcooked/undercooked/the gravy sucks.
1621: At least the turkey didn’t attack you and kill you. Or distract you while you were hunting it and you were eaten by a bear or a wild boar. Or attacked by the mean Native American tribe that wouldn’t give you corn unless they were roasting us with some of it.

2014: Aunt Petunia decided to come even though she has a terrible cough and cold and she’s hacking and spraying germs all over the shrimp cocktail and everyone around her.
1621: At least it’s not small pox. Or Ebola, most likely. A cold is annoying. It won’t kill you (or your husband, even if he complains like mine does

2014: I’m not sure if I have something for Cousin Violet who is vegan, gluten-free, peanut/tree-nut allergic.
1621: WTF are you talking about? Food doesn’t kill you. Not having food kills you. Eat the goddamn turkey.

2014: We have extra people coming and Uncle Tea Party can’t sit near Uncle Tree Hugger and if they do it’s gonna be tense. What do we do about seating?
1621: Um, remember that time the pilgrims sat with the Native Americans? And we were still calling them Indians? Pour the wine. It’s gonna be fine.

2014: Oh God I think we’re running out of wine. This is a catastrophe. Run out of anything but that. Have a stockpile. You know, in case of zombie apocalypse (or family invasion).
1621: Oh God this is a catastrophe. Stop the ship. And the Mayflower landed at Plymouth Rock, looking for beer…. That’s historically accurate by the way. Look it up.

2014: I forgot to put out the cranberry sauce/yams or whatever. And Cousin Martha is pissed that I didn’t ask her to bring her pomegranate squid sausage bacon chive stuffing.  All the family traditions are ruined.
1621: Our family tradition is NOT DYING. No one likes cranberry sauce anyway. We make it into Pilgrim Martinis.

2014: Aunt Betty invited her cousin who we think is a kleptomaniac. I think she’s stealing the napkins.
1621: Let her have the napkins. As long as she didn’t come to raid the village, no problem.

2014: I just rocked an epic fail from something I saw on Pinterest.
1621: What insane creature are you? Trying to carve your butter into the shape of a turkey? Butter doesn’t come from turkeys. It comes from cows. Or goats, because we can’t even afford cows.  Knock it the F*ck off with this Pinterest Sh*t.

2014: All the cousins want me to have dinner finished by 5:00 so they can go out for the Thanksgiving Sales at the big box stores. I don’t know what they want to buy but this seems to be important to them.
1621: As “someecard” on your Pinterest has said: Only in America do we wait in line and trample others for sale items right after we have given thanks for what we already have.  Shut up. Sit down. Eat your turkey. And Happy Thanksgiving. Goddamn it.

“The pilgrims made seven times more graves than huts. No Americans have been more impoverished than these, who, nevertheless, set aside a day of thanksgiving” – H. U. Westermayer

“Would you like to try the bourbon cider?” — C. E. Markley