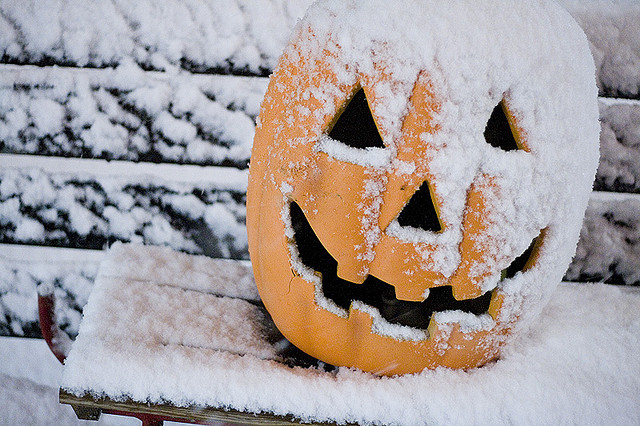 So if you don’t live in New Jersey, you may not have a clue what I’m talking about.  Then again, most folks living outside of NJ look at our Sopranos / NJ Turnpike / how do you live with that many people in such a small state and raise an eyebrow anyway, so this will be just one more thing that you can add to your list.

Guess what? My kids have no idea what Halloween is.  We haven’t had one in two years. Not a real one. Last year was Super Storm Sandy – everybody knows that one. But what most folks don’t know is that we didn’t have Halloween the year before that either because of Snowtober.  Sometimes called Snowpocalypse. That was a freak snow storm in October when all the leaves were still on the trees brought down branches and tree trunks all across Northern NJ.  Two years, two storms, two power outages that lasted longer than a week and reminded me that our electrical grid is that of a third world country. And apparently there is another storm on the long-range forecast. God help me.

So my kids need a little studying in cultural heritage of Halloween, because here’s their reality:

2. When it’s windy you need to sleep in the basement. Because trees might fall down and through your roof. And kill you. In your beds. So blow up the air mattress when the breeze blows through the trees, and head for the basement.

3.  Halloween isn’t always October 31st. Our town has rescheduled Halloween four times in two years.  The governor has even been involved in executive order for when Halloween should happen. No joke – I even found his tweet. Although I think he tweeted wearing the fleece, not the official profile suit picture. Apparently we were very optimistic in thinking that trick or treating could take place just a few days after Halloween, which was many days post storm. Apparently a week isn’t enough to clear roadways or restore power or normalcy.

4.  Trick or treating is also sometimes called Trunk or Treating, because sometimes parents get together and park in a parking lot and open their trunks and put the candy in there so you can walk around and get candy that way.  You know, because on Halloween there are downed trees and live electrical wires so you can’t go house to house.

5. Trick or treating safety includes going to lit houses, making sure you don’t trip over your costume, and walking around downed tree branches and live electrical wires.

6.  Smashing Pumpkins isn’t just a rock band, it’s also good way to release some energy and stress with your friends. And the parents will all be drinking away their misery upstairs so they won’t notice for a while anyway.

8.  School is always closed at Halloween. In fact, it’s closed for a week and then they will take away other vacation days to make up for it.

9.  Some of your friends that you were going to go trick-or-treating (or trunk or treating) will leave town and stay in hotels immediately following the storm. Other friends will stay in town for awhile and listen to their parents argue about the best strategy for getting gas for the generator and whether it makes sense to drive an hour west on Rt. 80 (or north to NY State) to get gas if you are going to use all that gas in the first place. Then your mom will eventually have a breakdown after living in a house that is only 58 degrees for four days (four days is usually the break point) and mom will scream at dad that he should have gotten the hotel reservation when she said so and now there are no hotels especially ones that take pets and how is it possible that they have to drive hundreds of miles to Washington DC in order to find heat.

10. Your mom ate all the Halloween candy a loooonnnnngggg time ago and the grocery stores are all closed and the ones that are open are on generators so you have to go shopping in the dark using your phone as a flashlight and all they have left is root vegetables. There will be no eggs or milk or bread in sight and your mom will talk about Armageddon.  The good thing about Armageddon is that the rules about eating healthy, going to bed on time, and doing homework all go out the window.

And in the end, yes, I’m glad this is the problem my children have.  But it’s not what we were banking on either.

So Happy Halloween, NJ. Fingers crossed that third time (year) is the charm…