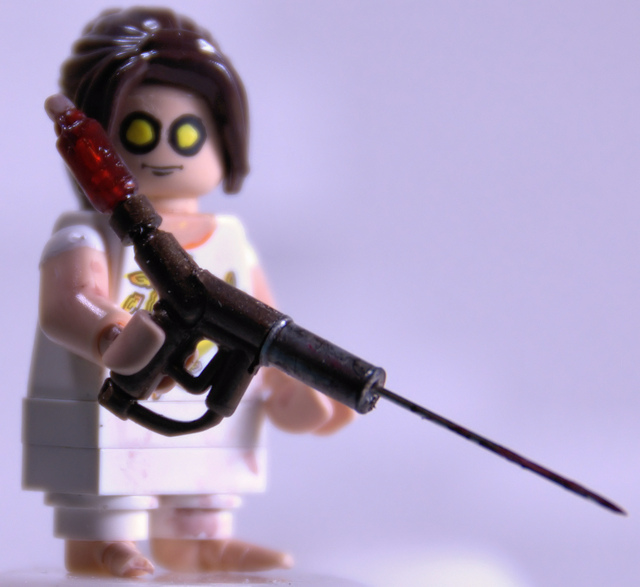 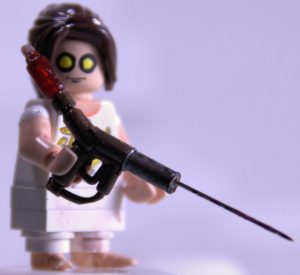 Katie’s yearly blood appointment usually brings me a particular amount of panic. I’ve never been a big fan of needles but I tolerate them for important things like vaccines against fatal illnesses and blood draws to make sure there’s no evil story going on inside a body. Especially the adorably cute and healthy body of my darling 5 year old Katie, who has Celiacs, keeps a strict gluten-free diet, and needs a yearly blood draw so her pediatric GI specialist can tell me my grade as her Mom and primary health advisor. For the record, I’ve gotten straight A+ grades the last three years running.

So when we got in the car and I told her we were going to “run some errands”, she didn’t have a clue. I thought I could at least put on her favorite radio station, Kids Place Live, so we could sing along to something fun, like that hilarious YODA song by Weird Al Yankovich, or even the semi-annoying purple spotted something or other dress song. But no. It had to be the llama. I don’t know if you know Lorenzo the Llama, but he’s this weird guy who uses a “lisp meets South Dakota accent” to pretend he’s a llama and continuously tells children that llamas don’t like to be touched. It sort of freaks me out that some middle-aged guy keeps talking about children touching him. So that little bit added to my anxiety on the way to the Big Blood Draw, 2011.

Katie (to my chagrin sometimes) is wicked smart, so she knew after three turns that we were heading somewhere unfamiliar. “Where are we going, Mommy?” she asked me from the back seat, strapped into her booster. “Overlook”, I answered. She mulls this for a second. “And what are we going to do there, at Overlook, Mommy?” Deep breath. “We’re going for your blood test, Katie”.

“NOOOOOOOOOOOOOOOOOOOOOO”. That really lasted about thirty seconds. Thirty full on seconds of “NO”. So then she runs out of oxygen and is forced to take a breath and I explain to her in my super mom calm voice, that yes, I know she doesn’t like blood tests, but it will be over very quickly and it’s important so her doctor can make sure she’s healthy. Then my daughter the future doctor has her interest intrigued and we talk for the next ten minutes about how they can tell certain things from your blood and how the lab works and where the lab is and on and on. Parking garage, intrigue, check. Big emergency center and ambulances, intrigue, check. Registration and waiting area, we draw pictures of what it will look like while Katie sits on Mommy’s lap and the smiling nurse with her butterfly needle and the four vials of blood that will be filled. We even discuss using the same arm that has the scrape on it from our walk home and close encounter with the sidewalk from the prior afternoon. I mean why wreck both arms, right?

So that part was good. Except the artwork practice didn’t quite translate to real life. Because as soon as she saw the chair with the little foldaway arm and the big tray with dozens of empty vials and the ACTUAL butterfly needle, it was all over.

I don’t actually blame her. I mean, if I could really SAY how I feel about needles instead of putting up my facade about how useful they are I might break into tears and hysterics and stamp my feet too. Two nurses and one mom and a small amount of toddler wrestling, we got the required blood. And a pretty pink stretchy bandage and some extras to bring home to use on our dolls, which was very nice of the nurse considering how Katie kept saying to her “OH YOU ARE HURTING ME — OH STOP DOING THIS TO ME — OH NO THIS IS TERRIBLE”. And trust me, Katie was talking in all caps.

Out we go, a promise of Five Guys Burgers and Fries in the works for lunch, before she heads to preschool for pony day. So you’d think that we were over the worst of it, it was done. I mean it’s about to be pony day. Happy thoughts, right? FALSE. We make a pit-stop at home to pick up the school bag before we head for burgers and need a bandage change. I get that. Those wrap around your arm sticky things drive me nutty. Of course, my latex allergy probably adds to that, but I was still on the same page with the poor tormented child. So Hello Kitty bandage applied, I’m ready to roll, but the bandage isn’t perfect, and part of the “dot” is showing, and since it’s pony day, I have this strong belief that the open wound needs to be completely covered before we go to touch farm animals. (No llamas included.) Call me crazy. Here’s where my understanding with the five-year-old drama queen starts to veer on different paths. Because apparently, I did not understand the magnitude of pain that is associated with REMOVING the Hello Kitty bandage, which, after she throws herself on the ground screaming, then comes to light. And the crazy part is that I haven’t yet touched the bandage. Really – the writhing on the ground has occurred because I have LOOKED at the bandage. I cannot actually admit in writing to how long it took to remove one bandage and get the new one on, but it happened. Katie then transitions into foot stomping along with the chant of I WANT TO GO TO FIVE GUYS. Usually foot stomping does not get you what you want in my house.

What I would have liked is to do is go to the bar instead of Five Guys. Can’t you see Katie sitting on the stool next to me, slapping her little hand on the bar and saying “Bartender! Mommy needs a glass of wine! I’ve been awful today!”

But what I did instead is find an ounce of humor, gratitude for a healthy daughter, make a pilgrimage to Five Guys, and yes, I’ll have fries with that.